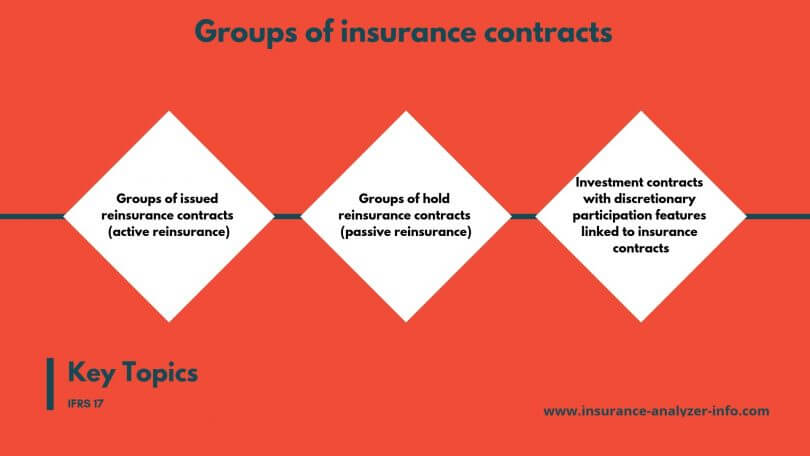 Field of application of groups of insurance and reinsurance contracts

The field of application of IFRS 17 comprises the below listed groups of contracts:

The basis of both measurements are discounted fulfilment cash flows (appreviated to FCF) arisen from insurance and reinsurance contracts plus a risk margin of non-financial risk. Both, the discounted FCF as well as the risk margin compose the contractual service margin that stands for the estimated profit that has not yet been realized. Thus, an early profit recognizition in the Profit and Loss statement is avoided.

Payments to the insurance company:

All types of best-estimated cash flows of the insured person to the insurance company that arise from the premium are part of this group.

Payments to the insured person:

For the next two types of payments to the insured person, the point in time of the payment’s occurrence in connection to its report and settlement to the insurer is relevant:

In addition and now included in IFRS17 are also payments that vary with the underlying item. Those payments are part of the variable fee approach (appreviated to VFA) categorized to the general model valuating contracts with direct participating features. In addition, payments to the insured person that arise from derivatives such as options or guarantees are part of the VFA.

How to create best estimates of future cash flows?

Discounting signifies applying discount rates to cash flows. The purpose of the application of discount rates can be differentiated between three main emphasises:

What to consider while creating discount rates?

Discount rates that are not directly observable on the market have to be created by providing an appropriate best estimation. However, IFRS17 does not stipulate any specific method of how to do the best estimation of discount rates but it only describes 2 different possible methods that can be applied: The first method of determining best-estimated discount rates is the so called “bottom-up approach”, the second is called “top-down approach”.

With the bottom-up approach the insurance company can determine the discount rates on the basis of risk-free yield curves by adapting the interest rates to liquidity qualities of groups of insurance contracts.

The top-down approach suggests deriving discount rates for a group of insurance contracts from a yield curve that reflects the current market yield implicitly in a fair-value valuation of an asset reference portfolio.

By applying these two approaches, either bottom-up or top-down, different discount rates can be the result of one approach compared to the other. Despite that difference, IFRS17 does not require from the insurance company to provide a reconciliation calculation between the approaches.

What is the Risk Margin while talking about IFRS17?

An insurance company has to adapt the estimation of the present value of future cash flows by adding a risk margin for carrying the uncertainty of non-financial risk such as the risk of cancellation or cost in regards to the amount and the timely occurrence of the cash flows. However, only risks directly related to the insurance contracts have to be considered. Thus, risks such as operational risk linked to future transactions are not included in the consideration.

This risk adaptation has to be made independently from the estimation of future best-estimated cash flows and the discount rates – whereas a double capture of non-financial risk has to be avoided.

The risk margin represents the compensation for the insurance company between

We love meeting people and making new friends. Use the buttons below and get in touch - don't be shy!

We use cookies to ensure that we give you the best experience on our website. If you continue to use this site we will assume that you are happy with it.OkRead more